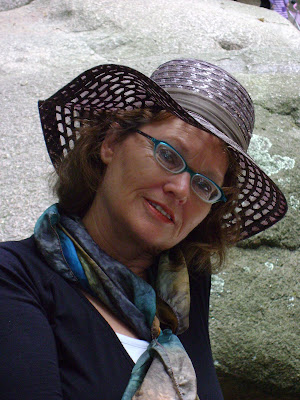 A bit of an adventure - for the fifth location of our
photo shoot in the area where Nel was born we
installed us on top of a dolmen (or "hunebed" in
Dutch), some ten feet above the ground. There
is enough space on top of dolmens, but we were
limited in our choice as we had no chairs with us.
Another limitation was the rather fixed distance
(four feet) between camera and model. Only one
spot turned out fit for our purpose, and then only just.

Nel took a seat on a smaller, slightly higher rock and
I managed to install the tripod for the camera on the
next rock which was rather convex and slippery.
The real problem was that there was no room for the
photographer to stand behind the camera. So we
installed the boxes with the glasses under the tripod
and I was kneeling half under, half behind the tripod,
just able to catch a glimpse of the camera display.
We had to keep the boxes tight between our feet
during this photo shoot which lasted about an hour.

A year ago I would not have attempted a photo shoot
under such circumstances but Nel and I are a seasoned
team so we decided to give it a try. It was an hour of
full concentration for both of us but we enjoyed the
crazy experiment. Many visitors took pictures of us
when we did the photo shoot and some remarked in
English "they are professionals!". We exchanged a
radiant smile and decided to act up to the viewers'
assumptions :)
Gepost door ogoloog op 02:14