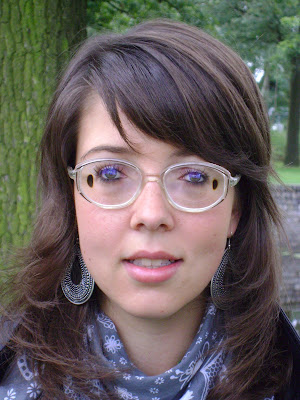 The "half moon" between bowl and surrounding
carrier lens is a charcteristic feature in Lentilux
glasses. However, this portrait of Marleen in
Nigura myodiscs provides an image I had never
seen before. Seen "en face", Lentilux shows no
cut in or power rings, and even the half moon
remains invisible until the model moves her head
a couple of degrees sidewards. Here are two half
moons. The effect must be created by an unusual
combination of the model's face dimensions and
the PD of the first owner of the glasses
Gepost door ogoloog op 13:36