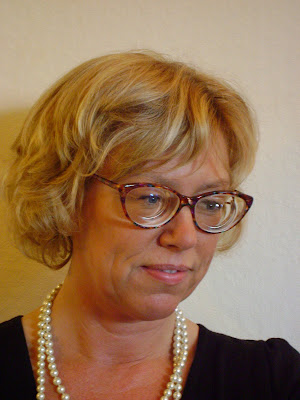 Conny in beautiful 1990's Trend myodiscs
and pearls. The lenses are Lentilux, but the
transition zone between bowl and carrier
lens is more abrupt than in the preceding
lenticulars. There is a considerable difference
between the vertical position of the bowls
as well. I don't know why they were made
that way. The glasses look as if they were
hardly ever used when I got them. Two
features in this portrait are worth mentioning.
The model's right eye looks smaller than her
left eye and this may have to do with the
central position of the right eye within the
corrective bowl and the peripheral position
of the left eye. The same effect can be seen
in many portraits of previous models in
Lentilux glasses. There is also a partial "double
eye" effect, due to the peripheral position of
the left eye from this angle
Gepost door ogoloog op 02:49