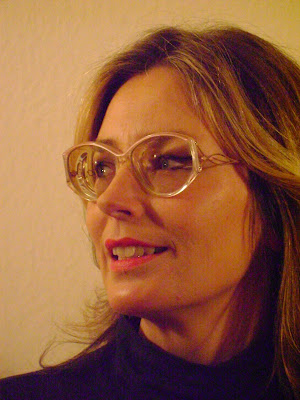 Another portrait of Carla in the Flair lenticular glasses,
showing the special effect of the transition between
the Rx -14.00 central part of the lens and the slightly
positive outer part of the lens. In the right lens the effect
is not unlike the image produced by the Kreislenti and
Formlenti myodisc. The bowl can be easlily recognized.
In the left lens however, the bowl is invisible and the
transition zone between bowl and carrier lens plays its
tricks with the model's make up.
Gepost door ogoloog op 12:00